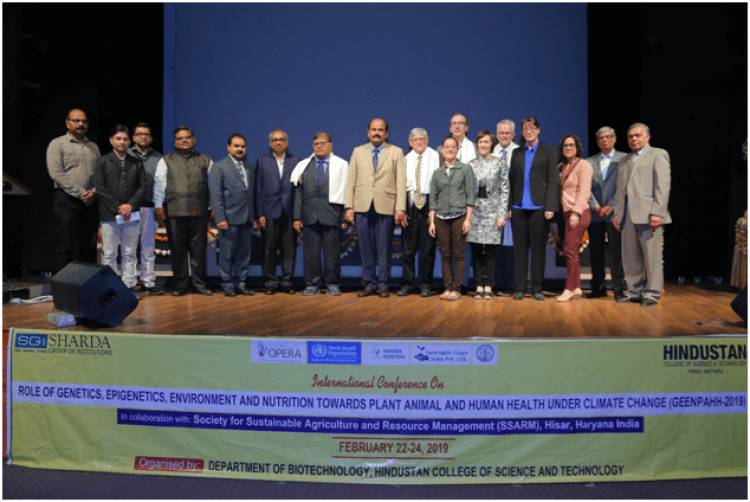 One Day Workshop on " Mock Parliament and Panel Discussion"...

The Bio-Technology Department of Hindustan College of Science & Technology, Mathura, a flagship college of SGI, has organized three-day International Conference on “ The Role of Genetic, Eti-genetics, Environment and Nutrition Towards Plant Animal and Human Health Under Climate Change” GEENPAHH-2019 from 22nd to 24th February, 2019. In the conference experts and professors and research scholars from different countries namely Canada, Germany, Belgium, France, Australia took part and delivered lectures in it. Prof. David M Alson was the Chief Guest and Prof. Arther Radak from France and Prof. Ashok Kumar from India were the Guests of Honour of the inaugural session.

The inaugural function was started by reciting Saraswati Vandana by Asst. Professor of Mr. Mukundlal of EC department of the college.

The Director of the college Prof. Rajeev Kumar Upadhyay welcomed the guests and the participants of the conference in his welcome speech. He produced the progress report of the college before the participants and told that Hindustan College is one of the first self financed college of Northern India. He told that the alumni of the college are working on the leading positions of different organization of India and abroad. He felt pleasure to share that the students of the Bio-Tech. Department get high positions in the merit list of AKTU, Lucknow and bring gold and silver medals for the college every year. He mentioned the name of the student of Bio-Tech. department Mr. Sarvanshu Saxena who achieved 10th rank in GATE-2018 exam. One student of CS department also got 22nd rank in the same.

In the presidential speech, Prof. David M Alson told that all the participants of the conference will be benefited. He hoped that all the participants would try to get solution of the various problems like environmental, health, nutrition, pre-mature birth, and pollution problem which all countries of the world are facing. He told that India is also facing problem of pre-mature birth on a large scale which needs a permanent solution.

Prof. Ashok Kumar, Guest of Honour of the inaugural function told the participants that the private institutions are playing vital role societal reform and developing new technologies. He stressed on adopting organic farming and develop new technologies in the same across the world to save nature. He told that organic pesticides are less harmful in comparison to chemical pesticides. By using organic pesticides farmers can overcome with many health related issues of our children.

Dr. Richard Safri focused on the obesity which is increasing day by day among youth across the world. He told that 70 lakh Indians are suffering from Diabeties-2 disease, as a result women are facing pre-mature birth of their babies.  Further he told that due to malnutrition youth are facing infertility problems. As a result parents choose vitro fertility that results health problems of the baby like heart problem, liver problem and the like.

At the end of the inaugural function Prof. D.G. Rai Chaudhary, Executive Director,  Dr. Rajeev Kumar Upadhyay, Director of the college and coordinator of the conference Dr. Arun Chopra honoured the guests by presenting memento and shawl.

The responsibility of compeering of the program was taken by Samiksha Khandelwal, Vartika Gupta, and Rachit Agrawal the final year students of Bio-Tech. Department. Dr. Hari Pathak proposed vote of thanks at the end of the program. 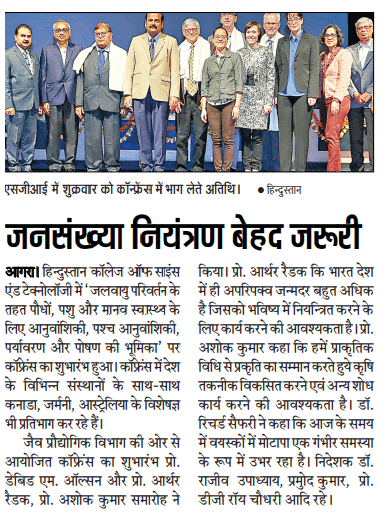