Women honored in HCST for their outstanding contribution to society 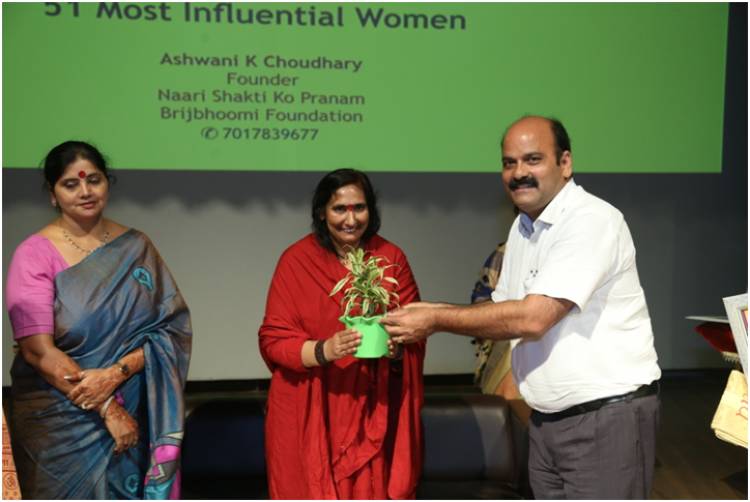 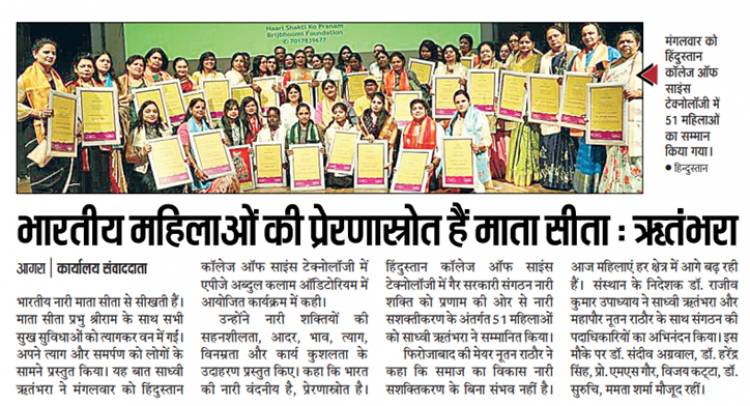 In Hindustan College NGO 'Nari'Shakti ko Pranam’ has organized a program. Didi Maa Ritambhara, the chief guest of the program. Under the empowerment of women by saluting power, women who played an important role in social change are blessed and honored by Sadhvi Pujya Didi Maa Ritimra . The program was inaugurated in the grand auditorium APJ Abdul Kalam Auditorium with the lamp lighting and Saraswati Vandana in front of Mother Saraswati. The director of the institute, Dr. Rajiv Kumar Upadhyay welcomed and greeted Chief Guest Pujya Didi Maa Ritimra and distinguished guest Ferozabad Mayor Smt Nutan Rathore as well as officials of all organizations. The founder of Nari Shakti Pranam, Shri Ashwani Kumar Chaudhary said that we have started efforts to make people aware through Swachhta Abhiyan program in the beginning. In which a team of many people was formed with us and our caravan moved forward. In 2018, with the inspiration of his wife, we formed an organization called 'Nari Shakti Ko Pranam'. Its purpose is to provide a platform to women who are our inspiration and the second objective is to provide a platform to women who play an important role in social work and social welfare. The director of the institute, Dr. Rajiv Kumar Upadhyay mentioned that many students of our institute have increased the honor and respect of the country at national and international level. The chief of the program, Didi Maa, gave the example of Mata Janaki and Shri Ram Chandra Ji and said that the change in mother Sita by sacrificing all the facilities shows her sacrifice and dedication. . She presented many examples of tolerance, respect, sacrifice, disrespect and work efficiency of women powers to students. The women of India are venerable and an inspiration to all. Firozabad Mayor Smt Nutan Rathore said in his address that the development of the society is not possible without women empowerment. Today, women are contributing in every field by with men. She said that this type of program will give respect and encouragement to women those who are doing excellent work in many fields so that she will set examples for other women The program was coordinated by the HOD, Mechanical Department Mr. Puneet Mangla and Sajia,Officer, Nayati Hospital Mathura officer At the end of the program, vote of thanks was proposed by the Director of the institute Rajiv Kumar Upadhyay

13 B.P.Ed students are selected in National Games Festival at Goa

A fresher’s welcome was organized by Anand College of Pharmacy on 1st September,...

Workshop on "B-6 Technology in Automobile Engines" @ AEC

Workshop on "B-6 Technology in Automobile Engines" @ AEC